Even though I know I’ve asked the veteran ASAH folks numerous times what it’s like to get to Duk Payuel, South Sudan, I can never remember what they tell me. In fact, I pretty much cannot remember much of anything they have told about their experience (with the exception of some vague do-goodery). Now I know why–it’s just so different that there is almost nothing I can do to explain it unless you have gone to a remote location with almost no modern infrastructure.
Getting there seems normal enough, if by “normal,” you mean piling into a missionary plane, bumping across national borders, running across a desert tarmac in front of UN planes, and landing on barely-maintained dirt airstrips.
Taking off was easier than flying commercially. We had an early-morning visit to Nairobi’s second airport (Wilson), had a security guard look us up and down to see if we looked O.K. (“sawa sawa”), and were then let directly onto the tarmac for boarding. A visit to the duty-free shop (no, we didn’t buy or take any of the single-malt scotch choices to the village), the bathroom, and we were ready to strap into the AIM flight over the Kenyan landscape.
Our first stop was Eldoret, a high-altitude airport that seemed more modern than Wilson. We picked up some fuel and chatted a bit with the pilots (who were both the kind of American Evangelical flyboys that I grew up around–pretty much seemed like the prelude to my high school FCA meetings). These two lads let us listen to their music (Christian praise music–though no Rich Mullins, surprisingly), and to their conversations about loving Nicholas Kristof–despite his politics–and George Clooney’s impending visit to South Sudan.
Flying over the green Kenyan hills, through the ever-drier landscape into Juba, and over the burned scrub into Duk Payuel gradually sucked my spirits into my gut. “What in the hell am I doing here?” was the question that kept going through my mind. The pilots threatened to not land the plane, as they could not verify that the village was safe. En route, the pilots were able to get through and verify that there was no violence currently in Duk Payuel, and we were cleared to land. As the plane finally lowered onto the rustic airstrip of Duk Payuel, and we emerged into the heat, the feeling only intensified, and I was nearly frantic. 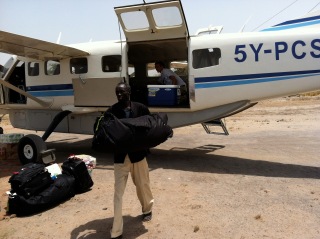 We unloaded the plane, the pilots said their good byes, and the plane rumbled down the same airstrip for immediate departure. As the plane quickly buzzed out of view, Miriam and I thought that this might be the longest two weeks of our lives. 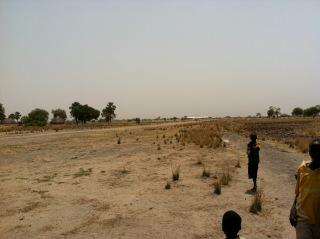 I don’t remember anyone ever telling us anything remotely like this, but perhaps we just didn’t want to remember

One response to “Getting to Duk Payuel”