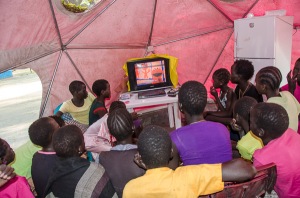 One of my young grandson’s first words this year was “Elmo.” To his mother’s great distress, he can’t say “Mom,” but he says, “Elmo!”

At the ASAH School on weekend evenings when the generator’s running, we drag the television out of the pink geodesic dome, hook it up to the power, and watch DVDs. The staff and girls enjoy some African musical programs, but I brought some popular American children’s movies, some educational videos and ELMO’S WORLD – another route to learn English. Who knew that Elmo would draw not only the children, but all of the staff, including some of our Kenyan construction workers.

My own children grew up in the early days of Sesame Street, and I remember their love for Big Bird and Oscar the Grouch, but I was not part of Elmo’s world until my grandson could toddle, and I had no idea that Elmo would be embraced so emphatically here.

And who expected that Dau, our program manager, and Manyok, our director would laugh and clap to see Elmo mail a letter! The whole crowd – close to 30 people watching a fairly small screen – chuckled at the antics on screen. The second time through and on succeeding viewings, our girls are repeating words on cue and reading from the screen. Here in South Sudan, they are as happy to join Elmo’s World as my little grandson is do the same in Fargo, North Dakota.