“When I first visited South Sudan, I didn’t know that all I had done before  – my education, my work, my parenting, my creativity – was preparing me for the task of educating fifty orphaned girls all the way through school.”

ASAH’s founder, Deb Dawson, has made it her life’s work to educate fifty orphaned girls in South Sudan. This year she was honored to be chosen by Temple Beth El for the Robert Feder Humanitarian Award. A dinner was given to present her award and celebrate all that she has made possible in South Sudan. At the dinner she spoke a few words that made her passion and heart so evident; I thought they were worth sharing.

Our host, Temple Beth El member, Jim Shaw is a diligent researcher, an intelligent and astute interviewer, and now a friend as well. In February, he surprised me with a phone and email message asking me to get in touch with him. Since ASAH had an upcoming “Get Your Panties in a Bunch” lunch, I expected he might do a short news piece. He was in meetings, so I left a message on his work and cell phone and emailed as well. Overeager. When he called to tell me that Temple Beth El had chosen me to receive the Robert Feder Humanitarian Award, it took some time for the information to sink in – did that mean there would be no news piece? And then I thought – Judge Myron Bright received this award last year – how had I come to be in such company?

The road that took me to South Sudan seems like the type of road Robert Frost described as less traveled, but if you look closely at the poem, you learn it isn’t as simple as that. The poet initially thinks the roads are different and is sorry he can’t take both. On closer look, he sees that they are worn about the same – one is not less-traveled than the other. He chooses one, figuring to keep “the first for another day. Yet knowing how way leads on to way,” doubts he will ever come back. He imagines his future self telling the story with a sigh: “Two roads diverged in a wood, and I — I took the one less traveled by, And that has made all the difference.” Was this a sigh of satisfaction or disappointment? Readers disagree. I believe the choice of path makes a difference, but I also believe in adapting to the conditions, changing course, taking steps to get back on track when lost, frustrated, discouraged, or disappointed.

When I stepped on this particular road, though I didn’t know where it would lead, I followed in the footsteps of my family and their ancestors. Early generations of my family traveled from Scotland and England and Denmark and other places, some of them arriving in western North Dakota in the 1870s and some of them in Fargo in the early 1900s. My ancestors built banks and other businesses, farmed, ranched, taught school. My mother’s father was the postmaster in Washburn, ND, and my Dad’s father was Mayor of Fargo in the forties. He started Dawson Insurance and brought my father and uncle into the business. I worked with my dad in the crop insurance side for ten years. My cousin Tom now has two sons in the business with him. Both my grandmothers born in the late 1800s, earned college degrees, and my great-aunt earned a Master’s degree in New York city, teaching at NDSU and working until retirement. My mother and father modeled leadership and public service as part of their everyday lives as I was growing up.

As a kid, I was drawn to stories of orphaned children. I couldn’t imagine what it would be like not to have parents. I planned to have a big family of my own. While things didn’t go as smoothly in my personal life as I had hoped, I achieved the dream of a big family of bio, step, and adopted children.

When I met Joseph Akol Makeer, the Lost Boy of Sudan who told me he wanted to help orphans in his home village, my children were grown, and I was free to explore my life’s dream of writing. I was working on a memoir about my own experiences as a mother of orphaned girls. Love and loss is part of the human experience. Being orphaned is a significant trauma, and healing is lifelong work.

When I first visited South Sudan, I didn’t know that all I had done before  – my education, my work, my parenting, my creativity – was preparing me for the task of educating fifty orphaned girls all the way through school. And I didn’t anticipate what it would take to make this dream a reality for these girls and their communities. I didn’t set out to do work that would bring me to this room tonight to receive this award. Like the rest of you, I get up in the morning, and I take care of what is necessary and possible to accomplish that day. And then I rest. Like everyone else, I strive to maintain a balance between my personal life and my work life, though it isn’t always easy.

When I turned 60 in September, I recognized, maybe for the first time, that I have fewer years left than I have lived. I can’t think of a way I could better use the gifts God has given me, than to be doing the work that I am doing now. I give thanks for the losses I have experienced in my life because those experiences have given me compassion.

I am lucky to have four of my children present tonight, my two biological sons and two of my adopted daughters. I want to thank them and the rest of my family for bearing with me, my friends for their moral support and encouragement, and the many generous people who have contributed to Protect. Educate. and Empower orphaned girls half way around the world. 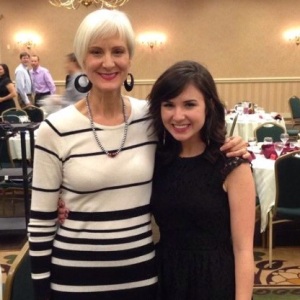 May we all be moved to live with such passion.