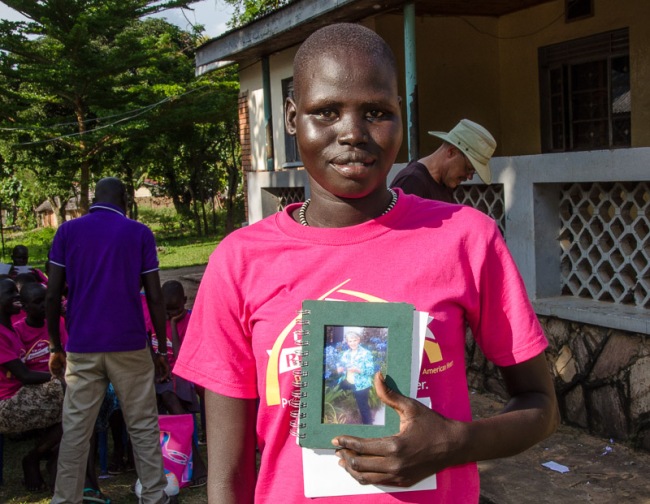 When the guard opens the gate to the new ASAH compound in Moyo, Uganda, and we step out of the vehicle, the ASAH girls move like one body, snaking toward me. Jessica, the videographer traveling with me for the third time, is somewhere in the background, having jumped out to video this reunion. Caught up in the moment, I forget about Paul Fields, a member of the Lutheran Church of Peace congregation in Platteville, Wisconsin. This is his first trip to Uganda, though he has visited South Sudan. The church has given tremendous support to ASAH, building the kitchen and dining compound which they never had a chance to see. Though our village of Duk Payuel and virtually all villages in Duk County were evacuated months ago, the church has stood by the ASAH girls. Building a brighter future for these orphaned girls is more than the structures that housed them.

One by one, the girls hug me in their way – the shoulder they choose feels like the wrong side to me, and I tend to get the rhythm of Sudanese greetings wrong. But the warmth of their embraces, the touch of their hands in mine, and meeting their shy but smiling eyes has me crying. Had I not sucked in a breath they would have heard sobs. Writing this now, tears well.

There are not enough tears to wash away the suffering, hardship, and traumas these girls have endured since February. The conflict prevented local schools and the ASAH School from opening, and the girls were home with extended family when their villages were attacked by rebels. The word reached them as runners from areas that had already been attacked warned them. Most fled with the clothes on their backs, but one of our ASAH girls – Rachel Abuk – still has the journal given to her by Gwen, her sponsor. Gwen had given journals for all the girls. The one for Abuk included a picture of herself. A treasure.